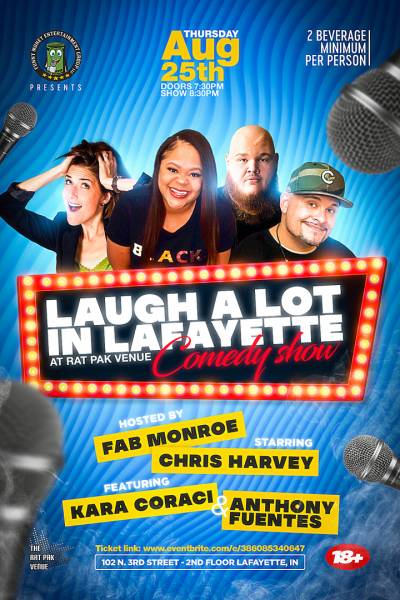 Hope your ready for a night of gut wrenching laughs!! We have an AWESOME line-up of Comedians ready to come to Lafayette and tear the stage up!! Gracing the stage this time around will be . . .

CHRIS HARVEY, is a stand up comedian, actor and writer out of Akron, Ohio. At the young age of 26, Chris is a regular at many clubs such as Cleveland Improv, Toledo, Liberty, Dayton Funnybones and many more. He's opened for many National acts such as The late John Witherspoon, Donnie Baker, Tk Kirkland, Karlous Miller, Chico Bean, Tommy Davidson, Damon Wayans Jr., and many more. He has won 2014 Ohio's best Amateur and 2016 Toledo's best urban comic, been nominated for OEA 2018 Best comic and Nominated for 2018 and 2019 Cleveland's road Warrior. He's been seen on Amazon Prime as "Snuffalouphogus" in the movie Hey Mr Postman starring Omar Gooding and Paula Jay Parker. He is seen on Starz and Hulu as "White Boy Bobby" in the new movie Rent Due Starring Ray Jr, B Simone, MGK, Michael Coyler and HaHa Davis. Chris also featured in 42 Dugg, Roddy Ricch's Music video "4 Da Gang"!!

KARA CORACI, also known as "Crotchie", is a high energy stand-up comedian, improvisational artist and public speaker. Critics refer to Crotchie as a "Firecracker!" and a "Squirrel on coffee!" In her routines, this little nut addresses social taboos and everyday hardships from step parenting, alcohol abuse to Facebook mishaps. Crotchie's wide range of talents has brought her to stages all over the U.S. including Chicago, Orlando, Las Vegas, Atlantic City, Detroit, and Milwaukee. Not only is she a performer, Kara has an extensive background in event and television production. She has worked on production teams for popular companies such as The Walt Disney Company, NBC's The Jerry Springer Show, Studio Smithy Inc, Red Frog Events, Nude Hippo and Oakland University Television. Kara has produced hundreds of events from monthly variety shows, comedy shows, art battles, street festivals, 5k races, and charity events. Her passion for the arts, entertainment, and life is quite obvious from the energy she exudes on stage.

ANTHONY FUENTES, Professional Stand-up Comedian, Fat funny guy from NY, who's been seen and heard on WGN9 News Chicago on the "Hispanic Heritage" segment, The Basement Hangout on Spotify, and on stages all over Chicago! It may be a cliche, but in the case of comedian Anthony Fuentes, laughter has been the best medicine to help the veteran deal with the PTSD he developed after tours in Iraq and Afghanistan. And now he is hoping to help heal his fellow military brothers and sisters with his comedy.

FAB MONROE aka STANDING O MONROE, returning crowd FAV and Monthly Host of LAUGH A LOT IN LAFAYETTE COMEDY SHOW is Chicago born and Harvey bred, who's been seen and heard on WGCI's Morning Show w/ Leon Rogers, is currently touring the country with comedian "MOJO" Dyon Brooks featuring on the Toxic But Funny Tour, and gracing stages all over the United States with her raw and edgy humor!

Age restriction: 18 years and over 2 drink minimum per person (can be non-alcoholic or alcoholic beverage)

Come out, get some drinks, and have some laughs with us!